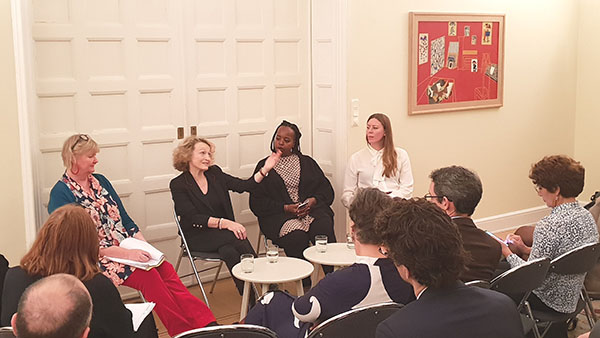 On 18 November, DPCR researcher Angela Muvumba Sellström joined in a conversation about conflict-related sexual violence, hosted by the French ambassador to Sweden, David Cvach, in Stockholm.

The event centred around the work of Annick Cojean at the Embassy of France, Stockholm in a discussion about conflict-related sexual violence. The ocassion marked Cojean’s work on the topic. A senior international correspondent with Le Monde, she is also the author of a book on the use of sexual violence by the Khadafy regime in Libya (Les Proies, Dans le harem de Kadhafi, 2012) and producer of a film on the use of rape in Syrian state prisons (Le Cri Étouffé, 2017, directed by Manon Loizeau).

Angela Muvumba Sellström leads the Project on Preventing Sexual Violence, a research project funded by the Swedish Research Council. The discussion was moderated by Sonja Scwarzenberger , ARENA and the other panelist was Eva Zillén, Co-founder and Senior advisor at Kvinna till Kvinna.