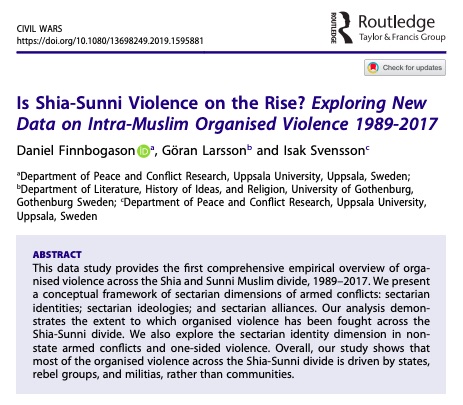 We are happy to announce that project leader Prof. Isak Svensson, together with former project coordinator Daniel Finnbogason (now ETH Zürich) and Göran Larsson (Gothenburg University), have been published in 'Civil Wars'.

The study utilises data on religion as an identity marker in state-based internal armed conflicts from the Religion and Armed Conflict Data (RELAC), while contributing with new and unique data on sectarian ideologies and sectarian alliance patterns, across the Shia-Sunni Muslim divide. The authors shows that most of this organised violence is driven by states, rebel groups, and militias, rather than communities. The study can be accessed under this link.